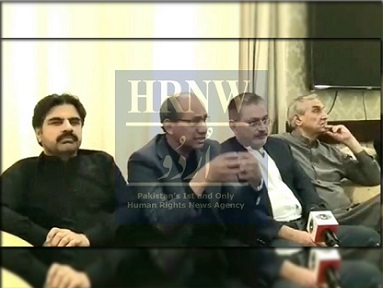 Islamabad (HRNW)- Sindh Ministers belonging to Pakistan People’s Party have said the PPP until the present day has been ready for the general elections in the country but their stance is very clear that first electoral reforms should be adopted before the polls.
Sindh Information Minister, Sharjeel Inam Memon, provincial Labour and Human Resources Minister, Saeed Ghani, and Local Government Minister, Syed Nasir Hussain Shah, stated this while addressing a joint press conference here on Wednesday.
Answering a question, the Sindh Information Minister said that only electoral reforms could ensure that the next general polls were held in the country in a transparent and fair manner.
Responding to another query, Memon said the present coalition government might have to take certain unpopular decisions in view of the alarmingly weakened state of the national economy due to certain terms of the agreement the previous regime had signed with the IMF.
He said that all the concerned political parties were required in the present scenario to join hands to take the urgently required steps for the improvement of the economy.
Sindh Information and Labour Minister, Saeed Ghani, told media persons that he had come to Islamabad for the signing of an agreement between the Sindh Employees’ Social Security Institution (SESSI) and the National Database and Registration Authority.
He said the accord had been signed for hiring data entry operators for speeding up the work for the issuance of the Benazir Mazdoor Cards (BMCs) to the workers in Sindh.
He informed the media persons that Sindh had become the first province to start issuing smart cards in the form of BMCs for extending the due privileges to the registered industrial workers in the province.
Ghani said that Sindh had so far issued 37,000 smart cards to the registered industrial workers in the province. But, he said that there had been delays in the issuance of the BMCs due to a shortage of data entry operators.
He said the fresh accord signed with the NDDRA stood for hiring the services of 162 more data entry operators for speeding up the work related to the issuance of the BMCs.
The Sindh Labour Minister said that in the first phase of the project BMCs would be issued to some 6,25,000 industrial workers registered with the SESSI.
He said that SESSI had been running a network of five hospitals and 42 dispensaries for the provision of the necessary health care facilities to the registered workers and their family members in Sindh.
He said that the basic aim behind the issuance of the BMCs was bringing transparency and accountability in the process of providing due benefits to the bona fide labourers so that pilferages in the system should end.
He said that in the second phase the BMCs would be issued to the labourers belonging to the informal sector who were mostly self-employed like pushcart vendors, taxi, and rickshaw drivers.
He reiterated the demand of the Sindh government that affairs related to the Workers’ Welfare Fund, and Employees Old-Age Benefits Institution should be completely devolved to the provinces in line with the 18th Constitutional Amendment as the labour had become a fully devolved subject.
Ghani said that the same demand had been made when he had held a meeting with the Federal Minister for Overseas Pakistanis and Human Resources.