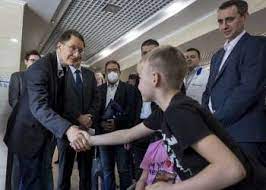 Berlin (dpa) – German Health Minister Karl Lauterbach promised Ukraine support in caring for people injured during the Russian invasion during a visit to the western city of Lviv on Friday.

“Ukraine needs humanitarian aid just as urgently as our military support,” Lauterbach said, according to a statement from his ministry. Lauterbach was received by his Ukrainian counterpart, Viktor Liashko.

Lauterbach was to participate in a donor conference for the construction of a rehabilitation centre for peopled who have become disabled during the war. The programme also included a visit to several hospitals.

“So much misery has been caused here by this barbaric war of aggression,” Lauterbach told German public broadcaster ARD early Friday.

He was travelling with a team of surgeons and specialists “to help care for the most seriously injured by burns,” Lauterbach said from Poland earlier in the day.

Specifically, the German government wants to support the installation and operation of container workshops for the production of prostheses. Through the German Medical Association, 200 surgeons and emergency doctors have offered to work in Ukraine.

“Children are stepping on mines, losing limbs. Blocks of flats are being shelled, innocent civilians and children are also being seriously injured,” Lauterbach said.

Agriculture Minister Cem Özdemir was also meeting his Ukrainian counterpart in the war-torn country on Friday.

“We are conducted a humanitarian initiative here in the name of the entire federal government, also in the name of [German Chancellor] Olaf Scholz,” Lauterbach said in reference to the two ministers’ visits.

Be the first to comment on "German health, agriculture ministers in Ukraine to signal support"