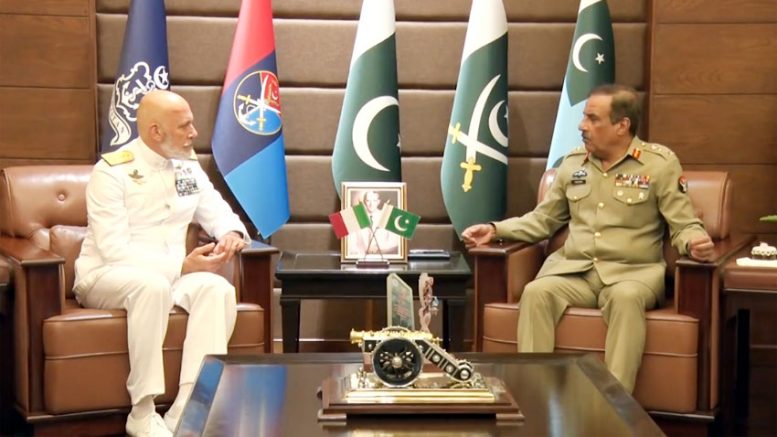 Rawalpindi (HRNW) Admiral Giuseppe Cavo Dragone, Chief of the Defence Staff Italian Armed Forces, who is on an official visit to Pakistan, called on General Nadeem Raza, Chairman Joint Chiefs of Staff Committee here at Joint Staff Headquarters, Rawalpindi today. Matters of mutual professional interests including further strengthening of security and defence cooperation specifically in the field of defence production were discussed during the meeting.
The Chairman JCSC reiterated that Pakistan and Italy enjoy cordial relations, which are based on convergence on all important issues relating to peace, defence and security. General Nadeem Raza said that there is enormous scope for expanding and deepening the existing relations in multiple domains including defence cooperation.
Chief of the Defence Staff Italy lauded the professionalism of Pakistan’s Armed Forces and acknowledged their sacrifices in the fight against terrorism.
Earlier, upon arrival at Joint Staff Headquarters, Admiral Giuseppe Cavo Dragone was presented with a guard of honour by a smartly turned-out contingent of Pakistan Armed Forces.