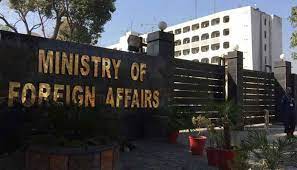 ISLAMABAD: (HRNW) The Canadian high commissioner to Pakistan was summoned to the Ministry of Foreign Affairs and a strong démarche was served over an MP’s “irresponsible and undiplomatic” remarks.

According to details, Islamabad has lodged a strong diplomatic protest with Canada over a Member of Parliament Tom Kmiec’s ‘irresponsible’ remarks against Pakistan’s military leadership.

The diplomat was told that the recent statement against Pakistan by Canadian Member of Parliament Tom Kmiec was against diplomatic norms and highly irresponsible.