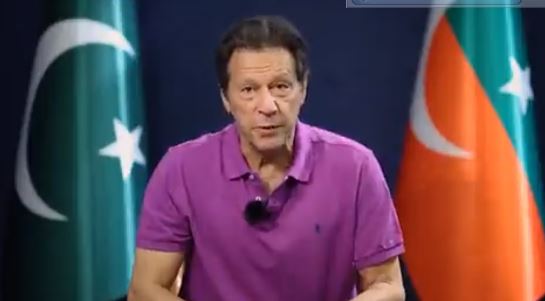 Islamabad (HRNW) Pakistan Tehreek-e-Insaf (PTI) Chairman and former prime minister on Tuesday belabored the government for using the police against the people protesting against prolonged power outages in Karachi.

Addressing the people virtually from his Islamabad residence Bani Gala in a live broadcast, he said that the government imposed through US-backed conspiracy has put people’s lives in extremis.

He said the people are unable to comprehend what has happened to the country in just two months after the toppling of PTI’s government.

The ex-prime minister said the people are taking to the roads today against load-shedding asking “where has the electricity gone?”

Criticizing the use of power on people, he said that in a democratic society, staging protest is a way to convey their grievances to the government.

He said the country can generate electricity as per requirement but the government, due to mismanagement, doesn’t have the money to pay the power plants.

Imran Khan said the country was on the track towards achieving sustainable growth, but the coalition government has destroyed it in merely two months.

He asked, “You [ruling coalition] put so many efforts in the conspiracy [against PTI] but what did you give to people?”

He invited the people to take to the roads in their respective cities on July 2 when the PTI would stage a power show in Islamabad.

Commenting on Turn Around Conference (TAC) being organized by the government to gather ideas for steering Pakistan out of prevailing crisis, Imran Khan said the country would come out of crisis only if half of Zardari and Sharif’s wealth parked abroad is repatriated to Pakistan.

Be the first to comment on "Peaceful protest a right: Imran Khan reacts to police excesses against protesters"