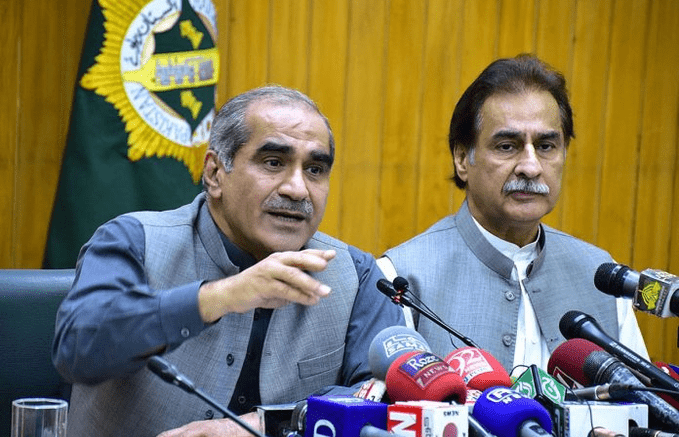 Lahore (HRNW) Railways and Aviation Minister Khwaja Saad Rafique on Sunday said that the nation was facing the consequences of the wrong decisions of former prime minister Imran Khan and his incompetent and ineligible government.

Addressing a joint press conference with Federal Minister for Economic Affairs Sardar Ayaz Sadiq at the Railway Headquarters in Lahore, he said that the Imran Khan government destroyed almost every institution and department of the country.

Citing the example of Pakistan Railways, he said the PTI government increased the deficit of the railways to Rs 45 billion, which is only one department.

He said that whatever Imran blamed on others, he himself did that, adding that he (Imran) was himself a habitual thief, looter, and cheapskate. “He always keeps an eye on others’ pockets,” he added.

Rafique said that Imran was living in a 300-Kanal house in Islamabad, and paid a minimal tax, but never answered the questions about his business. “He blames others that their children live abroad, but never tells where his own children are living,” he said.

The minister said that Dr Israr Ahmad (the late) and Shaheed Hakeem Saeed had long ago informed the nation that a project would be launched under Imran Khan to destabilize the country. “Now this stupid person is calling the establishment to intervene in the political affairs,” he said.

Rafique said that Imran Niazi always denigrated the Constitution and used foul language against those who do not toe his line.

Be the first to comment on "Nation facing fallout of Imran Khan’s wrong decisions, Saad Rafique"