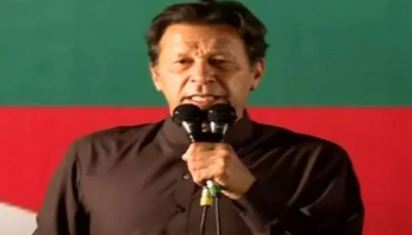 Islamabad (HRNW) The former prime minister and Pakistan Tehreek-e-Insaf (PTI) Chairman Imran Khan on Thursday lambasted the federal government for turning Islamabad into a fortress ahead of their protest originally scheduled outside the headquarters of the Election Commission of Pakistan (ECP).

He addressed the protesters in different cities via video link as PTI staged demonstrations against the election overseeing body.

He asked the government why it feared a ‘peaceful’ protest so much.

Raising question on impartiality of the top poll body, the ex-PM criticized PML-N leaders met with the ECP officials ahead of the foreign funding verdict against PTI.

He once again alleged that ECP has been turned into a tool to make-or-break governments as it forged results.

This is why, Imran Khan said, he endeavored to introduce electronic voting machines (EVMs) which could have eradicated 130 of 163 rigging methods.

He said PML-N and PPP blocked the EVM machines and ECP was also hand in glove with them.

The ex-premier said this was done so to control elections, taking away the people’s right of choosing the government they desire.

He recalled how money was injected in the Senate elections to purchase loyalties and how Sindh House turned into ‘market of consciences’.

Imran Khan said the voting turnout in the country was poor as people believe that their votes would not make any difference. The real democracy will come only when a man sitting in a village knows that he can change the government through his vote, he added.

PTI chairman said when he launched the party, he had no funds to run it.

He added that overseas Pakistanis were the first to support him as they had seen the actual democratic systems abroad, and they could see two mafias (PPP and PML-N) hijacking the country.

Imran Khan said PTI is the only political party in Pakistan which raises funds from public just like it happens in other parts of the world.

He said that PTI has a donor base of 40,000 donors while claiming PPP and PML-N had no donors at all.

He added that funds sent by Pakistanis living abroad were declared as foreign funding by the ECP.

PTI chairman said that it was important to get registered in the US as a LLC for fundraising or else people will not give funds to a non-registered entity.

He played videos of different overseas Pakistanis who donated to PTI and showed reservations on ECP’s decision declaring them non-nationals.

Diverting his talk to Arif Naqvi, he said that the fraud charges on him were framed in 2018 while PTI received funding from him in 2012.

He stated that the law prohibiting funding from a foreign firm came into existence in 2017.

Explaining the difference between an affidavit and certificate, he said that affidavit was one which Shehbaz Sharif had submitted in the court to allow Nawaz Sharif to travel abroad for treatment.

He added that a certificate – he signed and submitted to the ECP – was a declaration on the basis of details shared by the finance experts as he could not personally count such huge amounts of money and ultimately had to rely on the experts who had examined the records.

Be the first to comment on "Election commission is against ‘democracy’: Imran Khan"