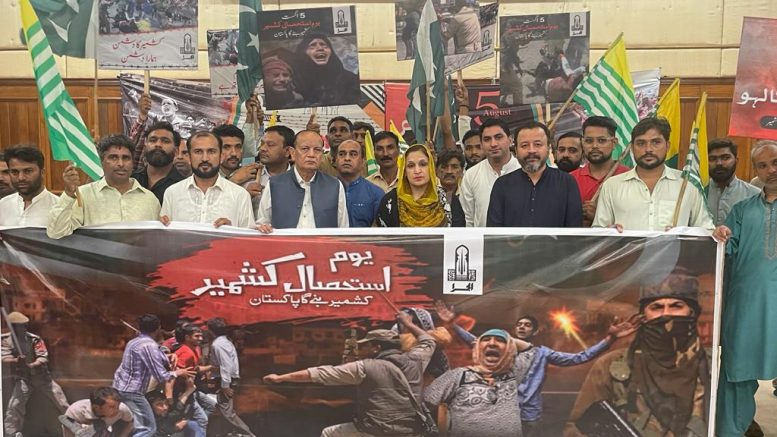 Lahore (HRNW) The Lahore Art Council has organized a rally in the rainy weather to show solidarity with the people of Kashmir on “Kashmir Solidarity Day” here on Friday 5th August at Alhamra Art Center, the Mall Road.
The Executive Director of Alhamra, Farhat Jabeen, led the rally from Alhamra Mall Road to 90 Shahrah-e-Quaid-e-Azam; Alhamra’s Officers, employees, and other audiences while holding banners, posters and raised their voices in favour of the Kashmiri people.
On occasion, Farhat Jabeen said that the International Community and the United Nations have to fulfil their ‘Responsibility to Protect’ innocent Kashmiris from crimes against humanity being committed by occupying military forces in the State of Jammu & Kashmir. Jabeen said that in the time of need, all Pakistani are standing with Kashmiris. “Kashmir dispute is an internationally recognized issue and needs to be resolved following the UNSC resolutions and aspirations of the Kashmiri people, she added.
According to the official Press release, LAC said that Alhamra would highlight the Kashmir issue till their independence as, according to the UN Charter of Human Rights, “Freedom is the basic right of any individual or nation.” Therefore, any brutal country can’t grab this pleasure of freedom from the people of Kashmir.

Be the first to comment on "Alhamra Observed Kashmir Solidarity Day"