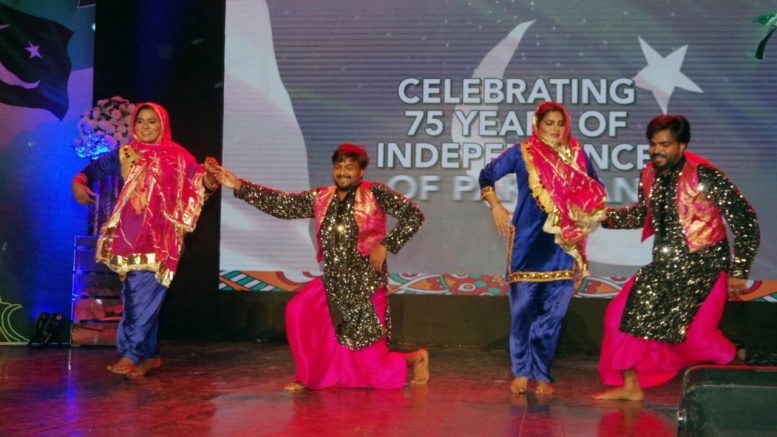 Lahore (HRNW) The three-day Diamond Jubilee celebrations of Pakistan’s 75th Independence Day under the supervision of the Department of Information and Culture at the Lahore Arts Council have ended. The Secretary of Information and Culture’s leadership skills were fully utilized to make the best programs accessible to the public during the three-day celebrations. All the cultural institutions, including Alhamra, expressed their special thanks to him.

On the last day of the celebration, honorary awards were distributed among the famous and well-known artists who have rendered services in various fields of art in Pakistan, including Ustad Ghulam Ali Khan, Shafqat Ali Khan, Sheeba Arshad and Hamid Rana, who were given Kamal-e-Fan Award.

Provincial Minister of Culture, Sports, Youth Affairs Taimoor Masood and Information Advisor Umar Sarfraz Cheema participated in the programs as chief guests. The three-day celebrations featured many programs, including an art and craft fair, in which folk music, dance, and traditional cuisine, highlighting the regional colours and beautiful costumes, were part of the event.

Punjab Arts Council and Lahore Arts Council played a prominent role in making the event a success. On 14th Aug, a special show for children, Ainak Wala Jin, children’s sitting in storytelling, painting competition, besides a musical program “Azadi Music Show” was presented at Alhamra Arts Council, during which a large number of people, including political figures, artists, were presented. The attendance in numbers made the program memorable. During the show, the public gave a standing ovation to all the performers, including Ustad Hamid Ali Khan, Malko, Sara Raza Khan and Imran Shaukat.

On occasion Executive Director Alhamra Farhat Jabeen said that first of all, I would like to congratulate the Department of Information and Culture, thanks to which the country’s 75th Independence Day was celebrated lavishly. “I am grateful to the Secretary of Information and Culture, who trusted Alhamra to fulfil this responsibility. Besides, the Punjab Arts Council and PILAC deserve congratulations for their positive collaboration. I am also grateful to the media and the people who shared their love to make this celebration a huge success.