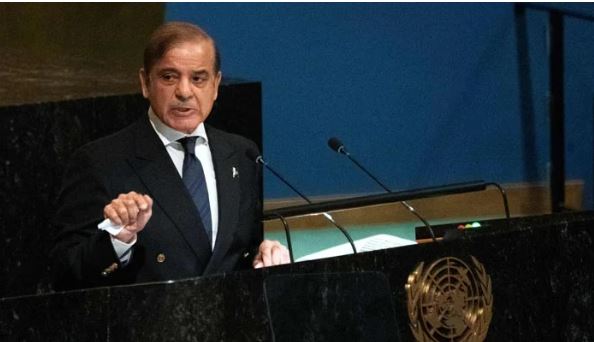 NEW YORK (HRNW)Prime Minister Shehbaz Sharif on Friday said that Pakistan is willing to make peace with all its neighbouring countries, including India.

Addressing the 77th United Nations General Assembly (UNGA) in New York, the premier said that Pakistan wants “long-term” peace with India that is only possible through a “just and lasting” solution to the Indian Illegally Occupied Jammu & Kashmir (IIOJK).

“India must take credible steps to create enabling environment for constructive engagement,” said the PM, adding that it should “demonstrate its sincerity and willingness, to walk the path of peace and dialogue by reversing its illegal steps of 15 August 2019, and ending forth-with, the process of demographic change.”

The prime minister said that Kashmiris are facing extrajudicial killings, incarceration, custodial torture and death at the hands of Indian forces.

He continued to say that India is seeking to turn Kashmir — a Muslim-majority region — into a Hindu-majority territory.

Hoping that the world body and UN Secretary-General António Guterres will play their role in urging India to implement UN resolutions, PM Shehbaz said that Pakistan will stand by Kashmiris “until their right to self-determination is fully realised in accordance with the relevant UN Security Council resolutions.”