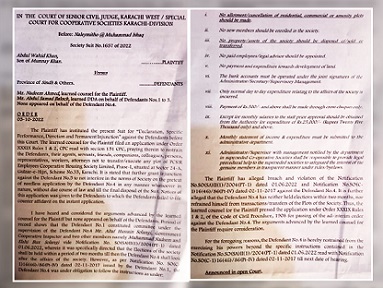 KARACHI (HRNW) Special Cooperative Court heard an application of injunction in Society Suit No. 1657/2022. The Court has issued an injunction restraining the Administrator/Incharge Committee PCSIR Employees Cooperative Housing Society from exercising any powers beyond its prescribed responsibilities.

According to the details, a member of PCSIR Employees Cooperative Housing Society had filed the said case implicating the Secretary Cooperative, MD, Registrar and In-charge Committee/Administrator Cooperative Department.

It was held in the case that the Co-operative Department has been appointing one administrator after another in the PCSIR Employees Co-operative Housing Society for ten years. These administrators come to conduct elections in two months. But instead of conducting elections, these appointed administrators engage in manipulation of plots, fake allotments, creating double files and unnecessary work due to which the system of the society has been badly damaged.

The counsel of plaintiff further states that recently an inspector named Altaf Hussain Solangi was made the in-charge committee with the aim of conducting the elections within 60 days but after the lapse of 120 days he has not done any work regarding the elections. Therefore, it is requested from the court that the committee-in-charge should be bound to conduct the immediate elections while fulfilling their responsibility and stop them from doing all the work contrary to it.

On October 3, the plaintiff’s lawyer, Nadeem Ahmed Advocate, while presenting his arguments, said that Altaf Hussain Solangi was appointed on June 1, 2022 and he was entrusted with the responsibility of holding elections within 60 days, but even after 120 days, Altaf Solangi did not prepare for the elections. Altaf Solangi has done all the things which were not his mandate.

Nadeem Ahmed Advocate submitted a notification No. SO(C-1)16(46)/86(Pt-IV) dated November 2, 2017 of the Government of Sindh regarding the powers of the Administrator/Committee-in-Charge which clearly defines its powers. has been described.

After hearing the arguments of lawyer Nadeem Ahmed, the honorable Cooperative Court has issued a restraining order to defendant No. 4 /Altaf Hussain Solangi in-charge of the Election Committee for doing any work beyond its stipulated responsibility till the next date of hearing.

It should be noted that the cooperative department has appointed administrators of their choice in cooperative societies across the city under various pretexts, who were destroying these societies by making double allotments through, indulging embezzlement and forgery. Even after many decades, the original allotments are still stumbling.