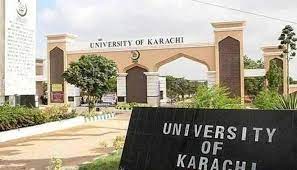 KARACHI: (HRNW) The Karachi university teachers have staged a protest against the delayed payment of monthly salaries.

According to the protesting teachers, their monthly salaries are delayed for the fourth time this current year.

Around 2500 employees have not been paid the salaries for November yet, the protesting teachers added.

The university is going through a worst financial crisis as the faculty of science are lacking funds to buy important chemicals for laboratories.

The teachers will boycott all academic activities and stage protests till the payment of salaries.

Earlier, two teachers at the Federal Urdu University for Arts, Science and Technology (FUUAST) were detained after police stopped their march towards Governor House from Karachi Press Club.

The FUUAST teachers (Abdul Haq campus) had taken to the streets to protest against the Sindh government for non-payment of salaries.

Several teachers, including female teachers, started their march from the Karachi Press Club and when they attempted to proceed towards Governor House, contingents of police stopped them from moving further ahead.