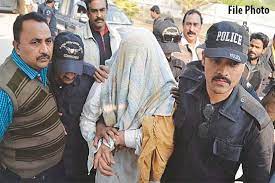 Police said that a gunfight was held between the raiding officials and alleged street criminals near Umar Sharif Park in Karachi’s Boat Basin area. Two suspects were arrested in injured condition after the exchange of fire with police officials.

Police claimed that the arrested men were involved in dozens of street crimes. They added that the accused also carried out a dacoity in Khayban-e-Nishat a few days ago in which the son of a hotel owner sustained wounds for resisting the robbery.