But there was also a group of high-schoolers in “Feel the Bern” T-shirts, sitting in the grass and finishing algebra homework as they waited for Sanders to arrive. Most of them were only 16, two years shy of voting age.

One supporter took a camera out of her My Little Pony backpack to take photos when the opening act, art rockers TV on the Radio, took the stage.

Someone in a knitted toque who looked to be in his early 20s yelled when the Vermont senator finally showed up, whistling on cue to applause lines slamming “the billionaires” and a “rigged economy.” 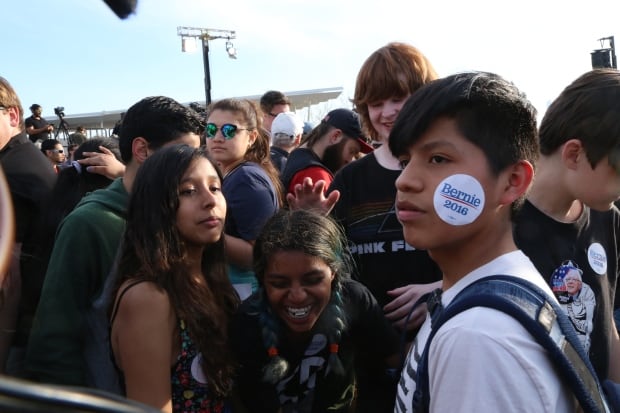 “Bernie just energizes something in me,” said 26-year-old Long Islander Elizabeth Vidic, who attended the rally with her aunt. “He’s just authentic. He doesn’t lie like the other politicians. I’ve never felt this political before.”
Gloria Garcia, 30, and her friends brought a bottle of white wine and a towel to sit on.
“It’s so chill here,” she marvelled. “Like a concert, not a political rally.”
The Sanders team certainly knows how to put on a show. A weekend get-out-the-vote event drew thousands of people to Brooklyn’s Prospect Park for doses of indie rock and a lecture on campaign finance reform.