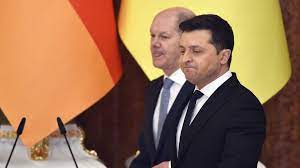 In a telephone conversation on Wednesday, they also discussed how grain exports from Ukraine could be made possible by sea, according to government spokesman Steffen Hebestreit.

The Russian blockade of Ukrainian ports has led to a halt in these exports, causing food prices to rise and exacerbating the food crisis in many poor countries, especially in Africa.

Last week, Scholz had promised Ukraine the delivery of further heavy weapons. In addition, a tracking radar for artillery is to be delivered. So far, however, no heavy weapons from Germany have arrived in Ukraine.

Currently, Zelensky’s special envoy for Ukraine’s EU prospects, Oleksiy Chernyshov, is holding talks with government representatives in Berlin. Ukraine hopes to be granted candidate status at the EU summit in Brussels on June 23 and 24.