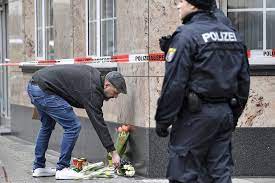 Berlin (dpa) – A man who drove his car into a crowd of people in western Berlin, killing a teacher and injuring 29 others, suffers from psychological problems and has had multiple run-ins with the law, a senior Berlin official said on Thursday.

The 29-year-old of Armenian origin, who was naturalized in Germany in 2015, has been under police investigation on multiple occasions for crimes including bodily harm and trespassing. None of the alleged acts were politically motivated, Iris Spranger told lawmakers.

“Posters were found in the car. Whether and to what extent these are connected to the crime is also the subject of the investigation,” Spranger said. “I assess yesterday’s events as a rampage by a mentally impaired person.”

The man drove into a group of school children and their teacher – visiting from a small town in the central state of Hesse – on a street corner on Wednesday before getting the car back on the road and crashing into a shop window further on.

“The trip of a Hessian school class to Berlin ended in a nightmare. Our thoughts are with the relatives of the dead and the injured, including many children. I wish them all a speedy recovery,” he wrote.

The man who drove the car is in police custody and will be brought before a judge on Thursday. If the judge issues an arrest warrant, he will be remanded in custody.

Police searched the man’s apartment late Wednesday evening, with Spranger saying his mobile phone and computer had been confiscated and were being evaluated.

Six of the people injured are still in life-threatening condition, according to a police spokesperson. Fourteen people who were not part of the school group were among those injured.