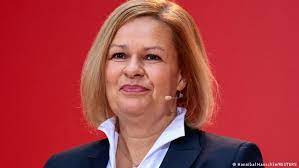 Brussels (dpa) – Germany’s Interior Minister Nancy Faeser said a “coalition of the willing” could be the way to break years of deadlock on migration and asylum reform in the European Union.

As she arrived at a meeting of EU interior ministers in Luxembourg, she suggested that a group of “10 to 12 countries” would temporarily support EU countries around the Mediterranean Sea either by taking in boat arrivals or by offering other assistance such as financial support.

The system, dubbed a “voluntary solidarity mechanism,” would “provide useful lessons” for a future permanent support mechanism, according to a draft declaration to be signed by all EU countries, which was seen by dpa.

It is unclear whether the proposal will receive enough support at Friday’s meeting, as migration remains a contentious topic among the 27 EU member states.

Gerhard Karner, interior minister of Austria, a country with a tough stance on migration, said he was “very sceptical to dismissive” about a declaration on relocating migrants.

Under EU law, the country where a person fleeing first enters the EU is responsible for receiving the person and processing their asylum claim. This rule has led to countries along the Mediterranean bearing the brunt.

A quota-based system to resettle migrants from the Mediterranean to other EU countries was adopted in 2015 but never implemented because Central and Eastern European countries refused to take people in.

Aid organization Oxfam denounced the plans, calling instead for “migration rules that share the responsibility of welcoming people and abandon unreliable voluntary deals that package detention, returns and border surveillance as ‘solidarity’.”

After over 1 million migrants arrived in the EU by crossing the Mediterranean in 2015, numbers have reduced significantly in recent years with 123,318 in 2021, according to the UNHCR.

Ahead of the Luxembourg talks, Karner said that he was against sending people smugglers the wrong message, namely that “Europe is open, Europe is taking people in.”

He emphasized the need for strong outer borders and also called for the possibility of border controls taking place between EU countries in future.

“Freedom of movement is important, yes. It is an essential part of the European Union,” he said. “But we also have to ensure security, and this is of such importance, that border controls within the EU can be necessary in some situations.”

The European Court of Justice decided in April that members are only allowed to prolong such controls in the event of a new and serious threat to public order or internal security.