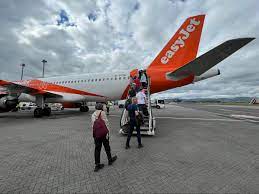 Berlin (dpa) – Around 20 EasyJet flights were cancelled early Friday in Berlin due to strikes by cabin crew over pay and conditions.

“The first flights have been cancelled,” said Holger Rößler, who is negotiating with the budget airline on behalf of the Verdi union.

EasyJet confirmed the cancellations, but said the majority of the remaining flight schedule – some 130 flights to and from Berlin – was to be maintained.

The union had called on around 450 EasyJet cabin workers to walk off the job at the Berlin base.

According to the airport’s website, early flights to Nice, Mallorca, Amsterdam, Malaga, Copenhagen and London were cancelled. Some EasyJet flights were able to take off in the morning because replacement staff were deployed.

EasyJet had advised customers to check the status of their flights on the internet before heading to the airport.

Verdi’s demands in the current round of collective bargaining include a pay increase of at least 5% as well as a one-off payment to compensate workers for rising prices.

“The exorbitantly increased prices as well as the huge additional workload on board due to the chaotic restart of the whole industry show that our demands are more than justified,” a Verdi spokesperson said.