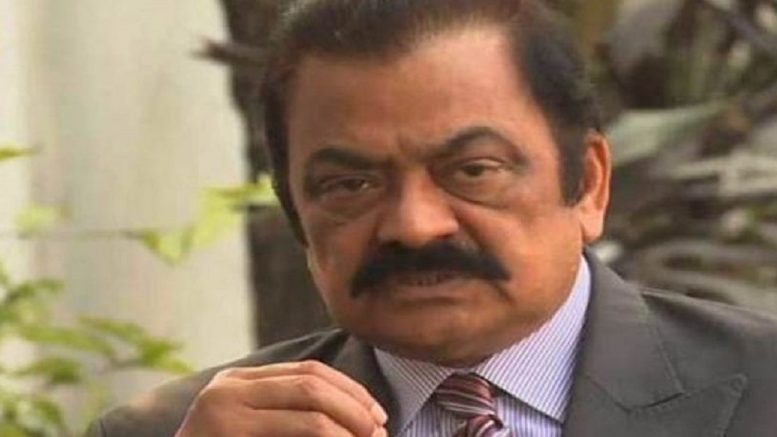 Islamabad (HRNW) Federal Interior Minister Rana Sanaullah has said that Imran Khan wanted bloodshed in the country on the pretext of a long march in May and that he must be arrested for desiring such a thing.

The federal interior minister claimed that Imran Khan was not a statesman but some who wanted to see anarchy in the country.

Sanaullah was speaking on TV’s show Nadeem Malik Live. He discussed a host of issues.

Speaking about talks with the TTP, Rana Sanaullah said that there would be no discussion on the reversal of the FATA merger and withdrawal of the Pakistan military from the areas near the Afghan borders — reportedly two of the key demands from the outlawed Tehreek-e-Taliban Pakistan.

He said that it had been decided that when the negotiations make progress they would be discussed in the Parliament.

The interior minister said that the number of active militants was around 4,000 but they also had families with them and they could be classified into three groups: those who wanted to lay down arms, their families including women and children, and their leaders who were known for committing atrocities in different areas.

The minister said that a uniform strategy could not be used for all three groups and the people who had committed heinous crimes like the APS Peshawar attack could not be considered for clemency or reintegration.

Sanaullah said that before the actual negotiations, “pre-talks” will be held to decide what issues would be discussed. If Afghanistan’s political government becomes its part, certainly politicians from Pakistan will also participate, he said.

The minister confirmed that a ceasefire with the TTP was still in place.

He expected that the outcome of the talks would become clear within months.

Asked what if the militants refused to lay down arms, the interior minister said that civil and military leadership were in consensus that the militants would not be allowed to bring back their weapons from Afghanistan and that Pakistan had the capacity and power to deal with the situation.

Sanaullah said that foreign element was behind terror attacks in Pakistan in the past.

The interior minister said that there was no threat alert against PTI chief Imran Khan and any claims about it were mere ‘loose talks’.

He said that one night Babar Awan claimed that an attack was imminent and the government did not leave that claim “unattended” but there was no evidence to back it.

He said if the PTI leaders had any information they could have informed the Khyber Pakhtunkhwa Inspector General of Police.

Sanaullah said that he did not believe the threat to Benazir Bhutto was “underestimated” as six other people in the vehicle with her remained unhurt in the attack in 2007.

He said that Imran Khan was being offered security and protocol at the same level he enjoyed while he was the prime minister.

On screening of the security personnel, he said the PTI had summoned Gilgit-Baltistan police for Imran Khan’s security, and they must have screened them. Islamabad police was on the outer security circle, he said.

Be the first to comment on "Sanaullah rules out reversal of Fata merger, withdrawal of military"