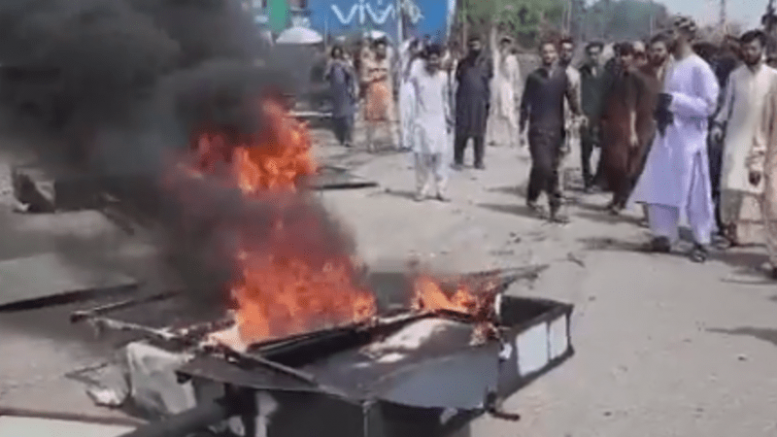 KARACHI (HRNW) A mob attacked the outlet associated with a global electronic giant in Karachi over alleged blasphemy on Friday.

Videos from the incident show men setting billboards and signage belonging to the South Korean electronic maker on fire. They also shouted slogans against the company.

After initial efforts to break up the protest were not successful, a heavy contingent of police arrived at the scene. They added that the protesters did not belong to a specific political party but were a mishmash of political workers and people who were ‘aggrieved and angry’.

It was not initially clear what triggered the attack, with some suggesting that it was over a QR code introduced by Samsung, the South Korean electornic giant, that allegedly had blasphemous content against the Prophet (PBUH). Earlier this year, a man had threatened to set a Pepsi truck on fire over a similar issue.

However, it was later clarified that the alleged blasphemous content was shared through a WiFi device that was located inside the outlet.

A Sindh police spokesperson also issued a statement saying that the station house officer of the Preedy police station received information around 11am that a “WiFi device” had been installed at the Star City Mall which allegedly played comments against the Holy Prophet’s (PBUH) companions.

They have also taken at least 27 members of the mobile manufacturer into custody.

The cybercrime wing of the Federal Investigation Agency has joined the investigation to identify those responsible for setting up the device.

Samsung has issued a statement saying that the company always maintains it’s impartiality in matters pertaining to religion.

“With reference to the recent developments in Karachi, Samsung Electronics stands firm on its stance that the company has utmost respect for all religious sentiments and beliefs and holds religion of Islam in utmost respect,” said the press release.

The firm said that, “the company has immediately started internal investigations into the matter.”