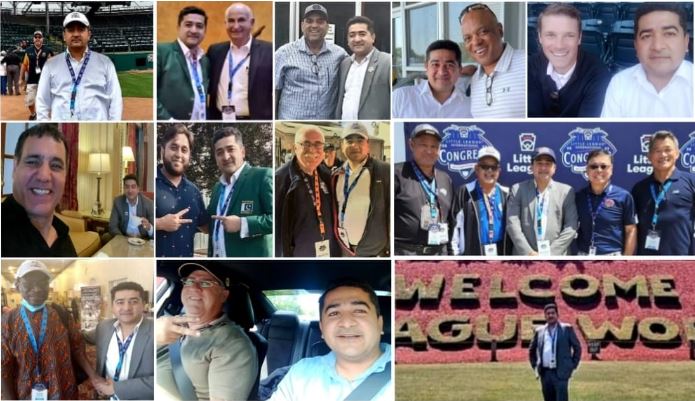 On his arrival there American baseball coach Randall Arms, who visited Pakistan last month, gave him a warm welcome at Harrisburg International Airport (MDT) and accompanied him to the Community Arts Center where he attended the Baseball Little League International Convocation, the most important purpose of his US tour.During this time, they met with 20-year-old baseball friends and foreign baseball officials and discussed important issues.These dignitaries include the presidents and officials of the Asia Pacific League Group, Africa and France.

At the convocation, American star Todd Frasier, Korn Pepe, took part in the presentation.Later, Syed Fakhr Ali Shah visited the museum where he not only enjoyed seeing the statues and equipments of the ancient baseball players but also got a lot of information.Later he watched a baseball match between Spike and William Sports with coach Randall Arms and his Pakistani mates and got details about Little League Volunteer Stadium.

Talking to PFB media Manager Pervez Ahmed Sheikh on the occasion, he said that despite not having a single baseball stadium in Pakistan, our performance is significant in Asia and the world, while on the other hand it is also causing significant loss of foreign exchange as they cannot alot to host the mega international events to Pakistan. Besides, despite Pakistan’s strong position, Pakistan is not gaining any strong position in Asia Election.

Syed Fakhar Ali Shah then arrived at Auckland Gardens, New York, where he met with key Baseball League management officials and left for Washington after discussing important issues.During this time, he discussed various issues with US politicians and Army officers and other

officers Michael George Gillian Waltz, Ronald Jane, Ben Klein, Frank Lucas and further restored the soft image of Pakistan.At the Phillips Training Center, he met with Director Player Development Harrisburg Washington, Djon Watson, Director Operations and Pitching Coordinator Elie Nebholes, Director Pitchingink Stoner and on-the-floor trainer for pitch speed best, Net Rose, where he shared his own performances and coaching. He returned to Pakistan for a short visit and left for Taipei to take part in  the Asian elections will be held on 3 july 2022.